Back with another story, today. The 4th part of my Horatio Hornblower fanfiction. All finished this morning in one sitting (whoo!).

So, a lot has happened and I’m not going to catch everyone up on all of it right here. But this is Horatio spending his leave at Archie’s house. Archie’s idea, not his. The past 3 parts are here:

Where we left off, Horatio was asked by the oldest three Kennedys to teach them a card game in which he is very proficient: the titular Whist. For those of you who don’t know what Whist is, it’s sort of like a precursor to the modern game of “10-9-8” and “Big Joker, Little Joker”. And if you don’t know either of those games, I’ll just leave the explaining to Horatio here.

I have a fun story afterwards of how I got the card game to work, but the story goes first. 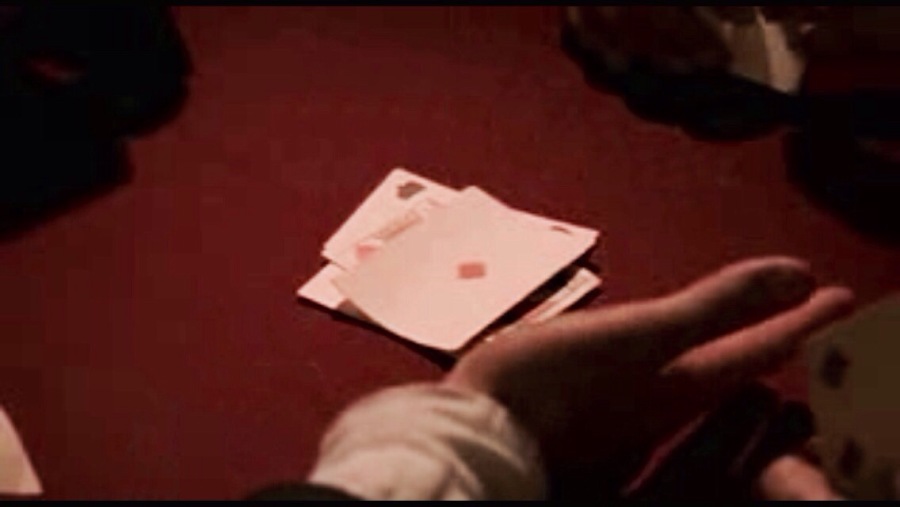 After a bit of searching, the cards were found, dusty and hardly used. Horatio brushed the dust off, shuffled them, and counted to make sure there were all fifty-two. The table was cleared and the four players sat down, all on different sides. The younger Kennedys sat nearby on a bench to watch the game. Mrs. Kennedy shook her head with a smile and went to do the laundry, telling everyone to have fun.

“Everyone draw a card to begin,” Horatio nodded to the pack and drew his off the top. Three other cards were drawn off the top and set on the table. Horatio’s card was a 5, Archie’s a King, Charlotte’s a 6 and Nathaniel’s an Ace.

“Do I win?” asked Charlotte.

“So, Charlotte, that means you just have a good chance of winning,” Archie winked at her.

“What do partners do?” asked Nathaniel.

Archie picked up the cards, pulling the four others back into the pack.

“I’ve seen you play before. Deal them all out, right?” He shuffled them again and picked up the first card, ready to start dealing.

“Yes. Thirteen to each person.”

Archie nodded and began sliding cards into four piles in front of each player. The pack diminished quickly and all the cards were evenly divided.

“And trump is…” Archie looked at his last card, “Diamonds.”

Nathaniel and Charlotte were examining their cards with furrowed brows, trying to look like they understood what to do next.

Horatio shifted his cards around in his hand a few times, organizing the cards by suite. He raised the first card to play, but was reminded by a glance from Archie to explain what to do next to his two students.

“Alright,” Horatio set his cards down in a neat stack to his right, “So, this is a trick-taking game. For each trick, someone leads with a card of a certain suite. Everyone else plays down a card of that suite and the highest card takes the trick. We each have thirteen cards. That means there will be thirteen tricks available. And you and your partner are trying to get as many tricks as you can, because your scores will be combined in the end. Whichever team has the more tricks at the end of the game wins. Understand?”

“And what does trump do?” asked Charlotte.

“If you don’t have the suite that someone led, you can either discard something of a different suit, or you can play trump, which is higher than the other cards and gets you the trick. For example, in this round a 2 of Diamonds would be higher than an Ace of Clubs.”

The faces around the table were now less confused as everyone examined their cards and organized them. Nathaniel and Archie were keeping their faces reasonably expressionless, taking a hint from the way Horatio was looking at his cards.

But Charlotte seemed to have a certain reaction for each of her cards. Certain ones elicited a happy grin, while others a concerned frown. It was getting hard to not figure out what her cards were.

Archie watched her for a few moments while Horatio hid behind his cards and tried to be polite. Clearing his throat, Archie leaned forward to his sister,

“Try not to react to your cards. People might guess what you have.”

“Oh.” She looked down at her cards again, cheeks a little red.

Everyone finished scrutinizing their cards, and Horatio put down the first card to lead: An Ace of Hearts.

“So, that’s the leading suite for the round. Everyone put down a Heart.” He explained, just to make sure.

Charlotte put down a 4, Nathaniel a 3, and Archie a 2. Horatio took the trick and set it next to him.

“Whoever wins the last trick is the one that leads the next one. So, I lead again.” He set down an Ace of Spades this time, and took another trick.

Archie noticed a bit of apprehension in his friend’s face as he gathered up the cards. He was probably worried about being rude by winning the game. Archie bit his cheek against a smile and put his next card down for Horatio’s lead of Hearts. Charlotte took the trick with a Queen and Horatio looked relieved.

Two more tricks were played, with Charlotte taking another and Nathaniel getting his first. Archie got his first trick with the 6 of trump a couple later.

“So, other than trump are there any special cards? Like ones that go higher than trump?” asked Will from the bench. Horatio looked over at him briefly.

“What about changing up the number of how many cards are dealt each round? That would make Whist more interesting.”

Horatio sighed, “No, it would not. That would make it not Whist.”

Will frowned and watched the cards fall and be picked up for a few more rounds.

“It’s more fun to leave some of it up to chance. You should change it up a bit.”

“If I wanted more chance, I wouldn’t play this game.” Horatio shoved a 2 of Diamonds out to the center of the table as Charlotte took another trick. Spades was led and he furrowed his brow in thought.

“Maybe I should make up my own game.” Will kicked his feet against the floor and looked at his siblings for approval.

“You go do that,” Archie said, taking his second trick. “I’ll learn how to play when you’ve got it all figured out.”

There were two tricks left in the game. Horatio and Archie each had two, Charlotte had three and Nathaniel had four. Everyone was silent for a few moments, considering last minute strategy.

“I’ll make my game so more people can play. I’ll only deal ten cards to start.” Will piped up. Horatio put a hand to his eyes and sighed.

“Why don’t you go figure it out with Charlie and tell us all about it when you do?” Nathaniel suggested quietly.

Will nodded, bounced off the bench and ran off with Charlie to invent his new game. Polly still remained, watching the game, transfixed.

“Why aren’t you playing anymore?” whispered Polly in an awed tone.

“Because we were planning,” Archie said, putting down an 8 of Clubs with an air of finality. Horatio glanced up at him, observing the way he held his card straight in front of him. This wasn’t a resigned defeat and casual holding of an invaluable card. He expected to get the next trick with the card he held.

Nathaniel put down his 10 of Hearts in a discard. Also a hopeless looking move, but he held his remaining card the same way Archie did.

Charlotte discarded a 7 of Spades. Now three cards were held in an expectant straight position.

It seemed the human nature in Whist to save Trump cards for the final round. There was a certain triumph in taking the last trick, even if one lost afterwards. Horatio would hate to be the exception to the rule. He played down his 10 of Clubs, leaving his higher card in his hand. The trick was his, one trick was left and everyone held trump.

All eyes turned to him and he put down his last card: the Ace of Diamonds. It lay alone on the table for a moment as the others looked at the card on the table. Charlotte laughed and set down her 10. Nathaniel slid in his Queen and Archie his Jack with rueful smiles.

“So close,” Archie shook his head at Nathaniel as Horatio collected the last cards.

“Who won?” asked Mrs. Kennedy, coming into the room with a basket of laundry on one hip and baby Beth on the other.

“Horatio, of course,” said Archie, standing up from his chair. “And Charlotte because she was on his team.”

“Everyone did well, though,” added Polly, “I watched the whole game.”

“I hope you don’t think me…” Horatio began.

“Rude?” finished Archie, “Horatio, if you lost while teaching us, I would be very surprised. We’ll have to practice. Next game we can beat you.” He smiled, “Right, Nathaniel?”

“I’m sure.” Nathaniel raised his eyebrows and smiled back.

Excited noises came from the other room and Will’s voice saying something about having “got it”.

Mrs. Kennedy cast a puzzled glance down the hall.

Polly went off down the hall and Nathaniel shrugged, “Or not.”

“I’m sure he will someday,” said Mrs. Kennedy. “In the meantime, will you four help me with the laundry?”

Aaand so ends a successful and minimally embarrassing game of Whist. I will be back with another episode hopefully soon.

Hope you liked it! 🙂

So, actually, to write this, I played the game myself, with Lego people marking the characters. It looked something like this: 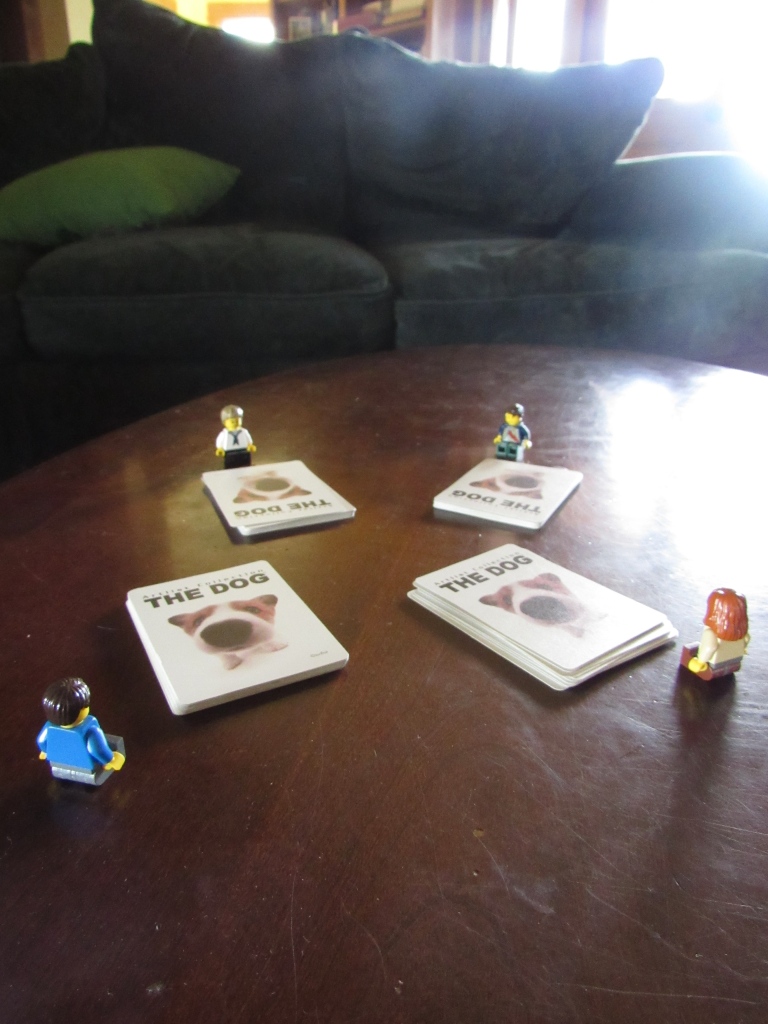 Sprinklesquink was giving me a hard time for playing with Lego guys, but hey! it’s research, okay?

I carefully wrote down everyone’s hands and what was played in what order. I decided the partners afterwards, to even it out.

For curious peoples who want to know all the details of the game that I didn’t bore you with in the story, here are my notes for you to decipher. 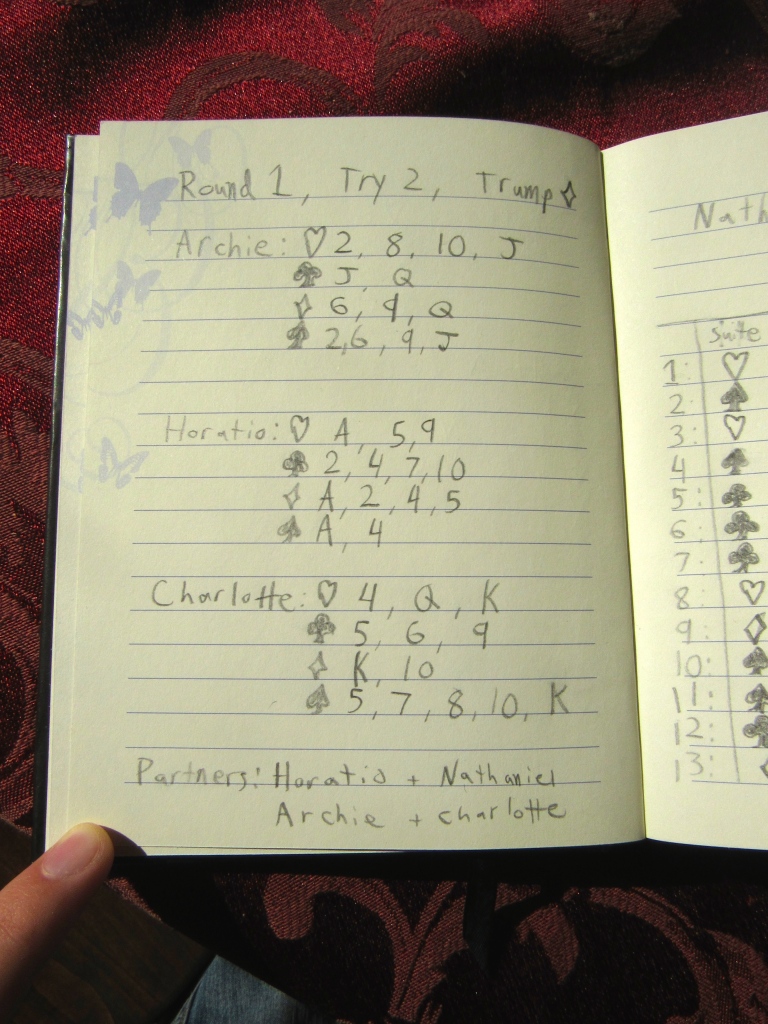 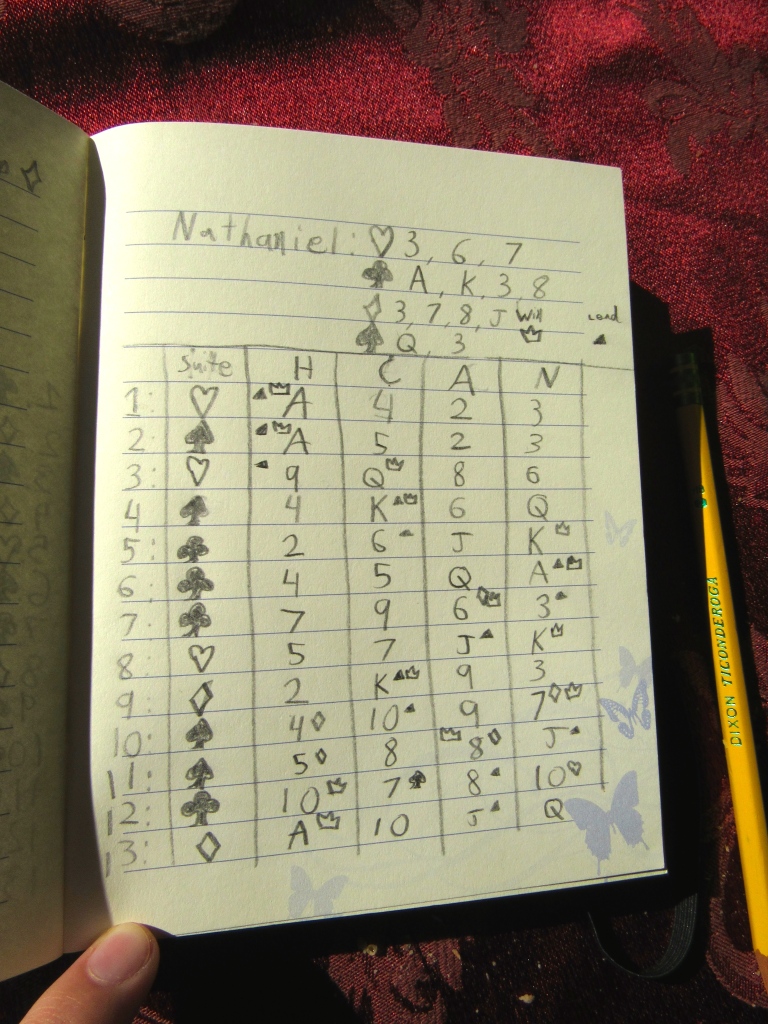 And a picture of the Lego people I used for markers:

Anyway, hope everyone liked the story!

And, out of curiosity, do you have a general idea now of how to play Whist?