My little first chapter excerpt seemed to be liked, the other day.

I’ve finished the prologue and the cover, so thought I’d put those up.

Here’s the cover to the book: 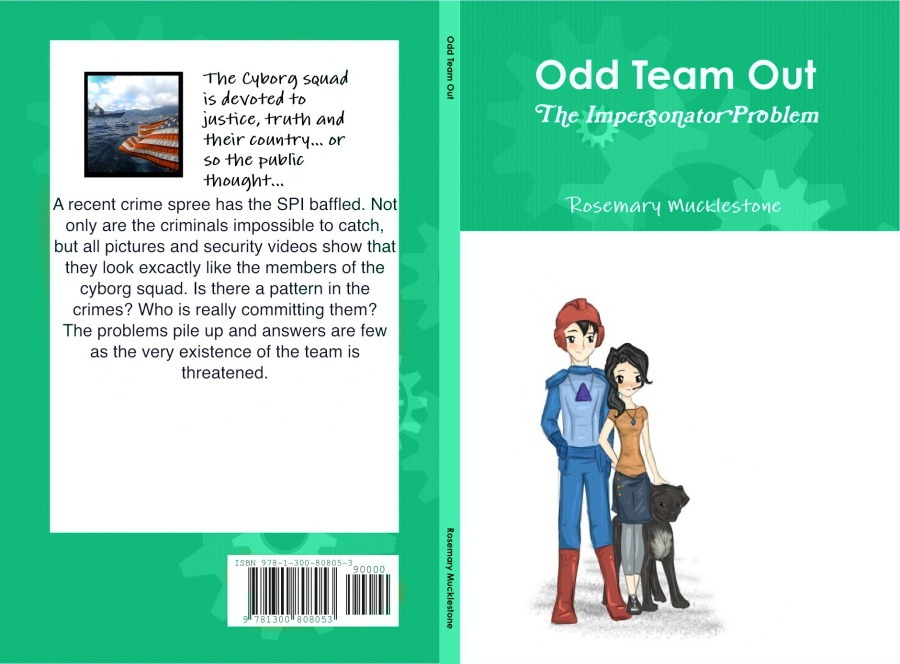 And the first three chapters of it: Odd Team out Sample

Without further ado… The prologue!

I have discovered disturbing news regarding the safety of the agency.

Meet underneath the river bridge.

Don’t bring the dog. Too much risk of being heard.

Rowboat for use on bank

Two shadows slid their way down the dike towards the moonlit river. The first shadow skidded to a halt at the bottom, barely making a sound. The second shadow, tripped, went onto a somersault and landed on his face, making a bit more of a sound.

“Ow, my nose. Sorry, Jean.” Cobalt stood up, rubbing his face. Jean sighed and put a finger to her lips. The two continued down the bank, with Cobalt avoiding the crunchy gravel.

Jean spotted something dark on the bank and squinted. Cobalt saw it too.

Cobalt ran up to it very un-quietly and Jean followed, wincing.

“Is this for us?” Cobalt asked in a whisper. Jean out her finger to her lips again and nodded. She reached to push out the boat, but Cobalt held up his hand. He took off his helmet and bowed his head.

“Dear God, please protect us on this mission and help everything go smoothly. Help us know what to do if everything doesn’t. We know that everything that happens is part of your plan. Just please be with us, God. Amen.” All of this was said in a whisper. Cobalt smiled at Jean and plopped his helmet back on his head.

Jean and Cobalt jumped into the boat and the latter took hold of the oars. At first, Jean was unsure and tried to take them from him, but he shook his head and began to row them towards the bridge with steady, silent strokes. Jean smiled a little and nodded.

All was quiet except for a small creaking of Cobalt’s metal armor and the whisper splash of the oars. In two minutes, the boat sat under the bridge, out of the light of the full moon. Cobalt pulled the oars into the boat and set them down silently. Jean pushed her hair back over her shoulder and folded her hands in her lap. Cobalt propped up his feet and crossed his arms. At a protest from Jean on how impractical this position was for quick action, he put his feet down.

A few minutes passed and Jean checked her watch: 01:34 hrs. She shivered and looked around, but still nothing moved. The silence rang in her ears.

“Cobalt,” Jean whispered, her own voice almost made her jump, “Something’s wrong.” Cobalt tipped his head and bit his lip, listening.

“You’re right,” He said, squinting, “It’s quiet….” A slow grin spread across his face, “…too quiet!” He did spider fingers towards Jean, cackling.

“No, seriously!” Jean was still whispering. She sighed, “I should have said yes to Mr. Ecks’ offer for backup.”

“Sorry I’m late.” Jean and Cobalt jumped at the gruff voice. Neither had noticed the second rowboat pulling up behind them.

Jean took a deep breath, “Sorry, sir. We didn’t see you. You said you had some important information to pass on?”

Cobalt turned to look at the shadowy figure in the boat just as he nodded.

“Yes, I do. I just want to make sure you are the right people. Names?”

The man smiled, “Good. The file is in my coat.” He unzipped his jacket and reached into the pocket. Then Cobalt noticed something; the man’s face seemed to harden as his hand found its resting place. His hand closed around something that was much to big and rounded to be a file, and Cobalt knew.

Everything happened at once.

Cobalt jumped forwards, rocking the boat violently. The man pulled the pistol out of his pocket, took quick aim for Jean and fired. That would have been the end of Agent Jean McStone, except for one thing:

Cobalt got in the way.

The sound of the muffled shot and the clang of metal were almost simultaneous. A sick look came over Cobalt’s face and a dark stain appeared at the hole in his stomach armor. Jean stood, shocked.

“Cobalt?” Cobalt didn’t look at her and put his hands on his stomach.

“I’m…” he winced and wobbled a little, closing his eyes,“…fine.” He gave a small cough, then his knees buckled and he toppled over the side of the boat. Jean rushed to the side and reached over to help him, but he had sunk too fast. Bubbles were coming to the surface and nothing could be seen under the icy black water.

Jean wanted to dive in after him, but she needed to take care of the man who shot him first. She pulled a knife out of her belt and jumped over to the other boat. The man raised his gun again, but Jean smacked it to the side and stabbed with the knife.

He bumped her arm a little and the knife pierced his leg. The man let out a yell, lifted his gun again and shot at the same spot on Jean’s leg. Jean collapsed, holding her wound.

So much for diving in after Cobalt, she thought. Then the handle of the gun smashed into her head and she knew no more.

“Beep. Beep. Beep.” Jean groaned and moved a little, realizing there were blankets covering her. The annoying beeping continued.

“Hi, honey,” said a woman’s voice, “Are you ready to eat?” Jean opened her eyes. Everything was a little fuzzy, but she saw that a nurse was in front of her. The walls and almost everything around her were white. Out a window to her left, afternoon sunlight shone in through the window.

“Do you want to eat?” the nurse asked again. Jean looked at the watery soup and her stomach turned.

“No,” she answered. The nurse’s brow furrowed, but she set the tray down. Jean shifted in her bed, “How did I get here?” she asked.

“You were found by some bikers this morning, lying on the rocks by the river. A bullet had grazed your leg and you had a head wound, so they called 911 and you were brought here.”

Jean closed her eyes and the memories of the last night came back.

She sat straight up, making her head throb. The nurse stood in alarm.

“Quickly, please. This is rather urgent.” A phone was gotten and Jean asked to be alone for a few minutes. As soon as the room was empty, she punched in the familiar numbers and held the phone to her ear. It rang a couple times, and then she heard a small click.

“Hello?” said a man’s voice. It was Mr. Ecks, the director of the SPI agency.

“Hello, sir. This is Jean. I’m in a hospital room right now and I’m sure they won’t discharge me for a while, but I need to report back. Can someone get me out?”

“This isn’t a secure line. I’ll tell you when I see you. Please hurry.”

“Of course. See you in a bit.” There was a click. Jean hit the end talk button and lay back in bed.

Just a matter of time, she thought as the nurses came back in.

Jean sat in a chair across from Mr. Ecks’ desk with Gilligan sitting at her feet. Mr. Ecks nodded to her leg,

“Feeling better?” Jean wiggled the leg a little and nodded, but didn’t smile. Mr. Ecks clasped his hands on his desk and looked straight at Jean.

“Now,” he began, “What was it you wanted to tell me?” Jean looked away.

“I should have taken your offer for backup, sir. I… Cobalt… well…” she swallowed. Mr. Ecks leaned back,

“I was wondering why Cobalt isn’t here. He was taken hostage, wasn’t he?” Jean shook her head and looked down at her shoes. The director looked confused.

“Then where is he?” Jean didn’t look up.

“Cobalt is missing, sir. And wounded. He jumped in between the assassin and me just as the first bullet was fired. He was hit in the stomach and fell into the river. I was going to dive in after him, but I was sure the man would shoot again. I tried to knock him out or unarm him, but it didn’t work. I’m not sure what’s happened to Cobalt.”

Mr. Ecks’ eyebrows were up almost to his hairline when Jean looked up. She cleared her throat.

“Can we drag the river for him?” Mr. Ecks blinked a few times,

“That’s too conspicuous. I’ll send down some divers.”

The divers were sent out almost immediately. Mr. Ecks and Jean watched from the riverbank, hoping that something would be found. For half an hour, the divers went up and down that section of river, scouring for anything that could be a sign of Cobalt.

Finally, they came up. Jean ran over, limping,

“Anything?” The first diver rubbed his arms,

“Dang, it’s cold down there. Sorry, I didn’t find anything. But my buddy did.” The other diver surfaced and Jean went to help him out.

“Did you find something?” she asked. The diver nodded and went under for a few more seconds. Jean’s heart pounded in her ears. Please, God, help Cobalt be alive. The diver came up and threw something onto the bank.

Cobalt’s helmet. With a bullet hole through it.

Jean felt lightheaded. Her knees didn’t seem to work anymore and she sat down hard on the grass. Mr. Ecks ran up,

“What did we find?” He saw the helmet and went silent.

The team had lost a member.

Tell me what you thought!

33 thoughts on “Odd Team Out: The Impersonator Problem”