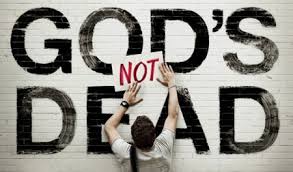 Josh Wheaton is a freshman at college along with his girlfriend (never caught her name). While registering, a man sees his cross necklace and advises him to take a different philosophy class. Josh says that would be too inconvenient and the man shrugs and says: “It’s your funeral.”

Josh gets to class where the first thing their teacher, Professor Radisson, teaches is that God is not necessary. He then asks all the students to write on a sheet of paper the words “God is dead” then sign their name. If they do, they will automatically pass 30% of the final grade. Josh refuses, and Radisson declares that the alternative is to prove that God is not dead, and to do it in front of the whole class. If he fails, he will lose 30% of his final grade, ruining any plans he has for his future as a Lawyer.

What will Josh do? Will he succeed in proving that God is not dead?

Sub-plots (this is very bare-bones, so as not to ruin the story and how they all intertwine):

Amy: A famous reporter who finds out she has cancer and her life is turned upside down.

Mina: A woman helping her mother who has dementia.

Pastor David: A pastor who is bored with regular church life and wants to do something exciting like his missionary friend, who is visiting him.

Ayisha: A Muslim girl who is hiding her Christian faith from her family.

Martin: A young Chinese man in Josh’s class, struggling with what he believes.

The plot was well thought out and very interesting. I thought that, with all the sub-plots, it might be a little disorganized but they used them all very well and turned it into a wonderful, un-confusing movie. The dialog was realistic; the debates between Josh and Radisson are very good and I sympathized with all the characters.

Overall, it is a very good movie and would recommend it to everyone.