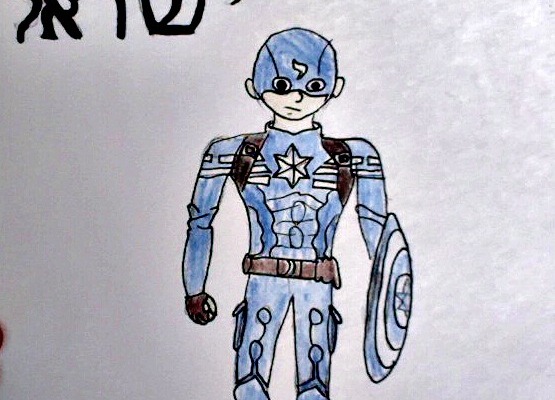 I drew these a while ago, and just took pictures of them on the computer the other day. The picture quality isn’t that great, but you’ll get the idea.

I hebrew, that says “Captain Israel” up there. That’s a Yod on his forehead, the first letter in the word Israel.

The reference picture for that was the album cover of the Captain America 2 soundtrack.

And that is the Hamas Soldier. See his shoulder?

That one’s reference picture was a screenshot my brother took from the bridge fight.

So, I was talking with my brother about these pictures and there’s actually a funny parallel between these pictures, the movies and history.

Arabs (who made Hamas) are decended from Ishmael and Esau, the brothers of Isaac and Jacob. Funny how the story of Bucky and Captain America relates to the tragic brothers turned enemies of the bible.

I didn’t think about that until after I’d drawn the pictures, though. 😛

What do you think?