I’ve been nominated by writinganyone for the Infinity Dreams Award, which is something I’ve never done before.

-Thank the person who nominated you. (Thanks, writinganyone! :))

Now, onwards to the rest of the mission!

1. What is your worst memory?

Probably one of our dogs dying. Gilligan, our dog who I actually put into my first book, Odd Team Out, had some heart problems and died after being completely fine two days before. He had a horrible cough; we took him to the vet, got some pills and took him back. We put him on the dog bed, and even though he could barely walk he got up and gave the bed to our other dog, Ginger. Then when I went out to say goodnight he was dead.

But, he lives on in Odd Team Out, and a picture on my wall. 🙂

2. If you could be any book character, who would you be?

Oooohh . . . how can you make me choose? *thinks really hard for a long time*

Fergus Leatherhead. My favorite character from my favorite books.

Tintin. Because Tintin does everything awesome. (We’ll ignore the fact that he gets knocked out roughly 70 times over the course of his series. I counted.) 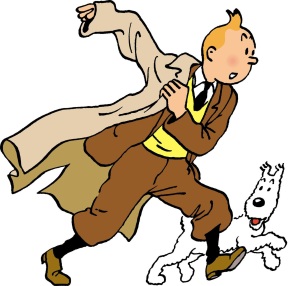 Cobalt Winter. Because he’s mine. 🙂

Lady Carliss, from Chuck Black’s books. One of my favorite book heroines.

Imogen from The Ascendance Trilogy. Because I’ve said to many boys to say *ahem* Sage.

No pic for her, sorry.

At 3, the only recorded ambition I had was to be the ugly duckling’s friend.

A year or two down the line after that I got really into crafts. I made myself a shirt and apron out of construction paper and when Mom hurt herself I would worriedly ask if there was anything I could craft her. So, maybe Craft Mart employee?

The only job ambition I really remember having was being a sailor, other than that.

I was also really into making up stories and acting them out with my sister and multiple stuffed animals. I loved coming up with stories and was constantly running off to an empty room to play my new character. The thought of actually writing those stories down never really occurred to me until I was 12 . . .

Well, milk chocolate Hershey’s Kisses are pretty dang gross (though I like the other kinds). And Butterfingers, just for the fact that I couldn’t care less for peanut butter.

5. If you had to change your name, what would you change it to?

7. What is your favorite thing to do?

What sort of a question is that?! Out of everything I could do in the whole world you want me to pick one thing? Outrage!

Sledding. Down an enormous hill. All day.

9. Favorite continent (other then the one you live on)?

Europe. And more specifically, The UK and Ireland.

Jean. Well, that explains the name of my heroine in Odd Team Out. She was originally supposed to be me. But, *shrug* characters develop. She’s only one of my moods now. 😛

So, that was fun! Now, I nominate:

Gabrielle at Write For The King

Audrey at The Measure of a Book

Erin at The Upstairs Archives

Daisy at A Bookish Flower

Claire at The Wonders of His Creation

What’s something that makes you smile whenever it comes to mind?

You can order the weather for your birthday. What would you make it be?

What fictional villain makes you the most mad?

What’s the funniest joke you’ve ever heard? Tell us!

What kind of photos make you say “Wow”?

Which fictional characters’ deaths do you mourn the most?

What’s something you’ve never tried, but would like to?

Something funny you said or did as a kid?

What books got you started on reading?

Do you like cold weather or hot weather better?

Feel free to pick up the tag, or answer choice questions in the comments!