Well, that’s the first time I’ve broken my posting schedule in a bit.

So I’ve been doing, as the title says, some fan stuffs recently. So I thought I might share those today since I didn’t particularly have much else in mind.

That looks very jumbled. And it’s an accurate representation, really.

This podcast has plenty of gems like this. XD 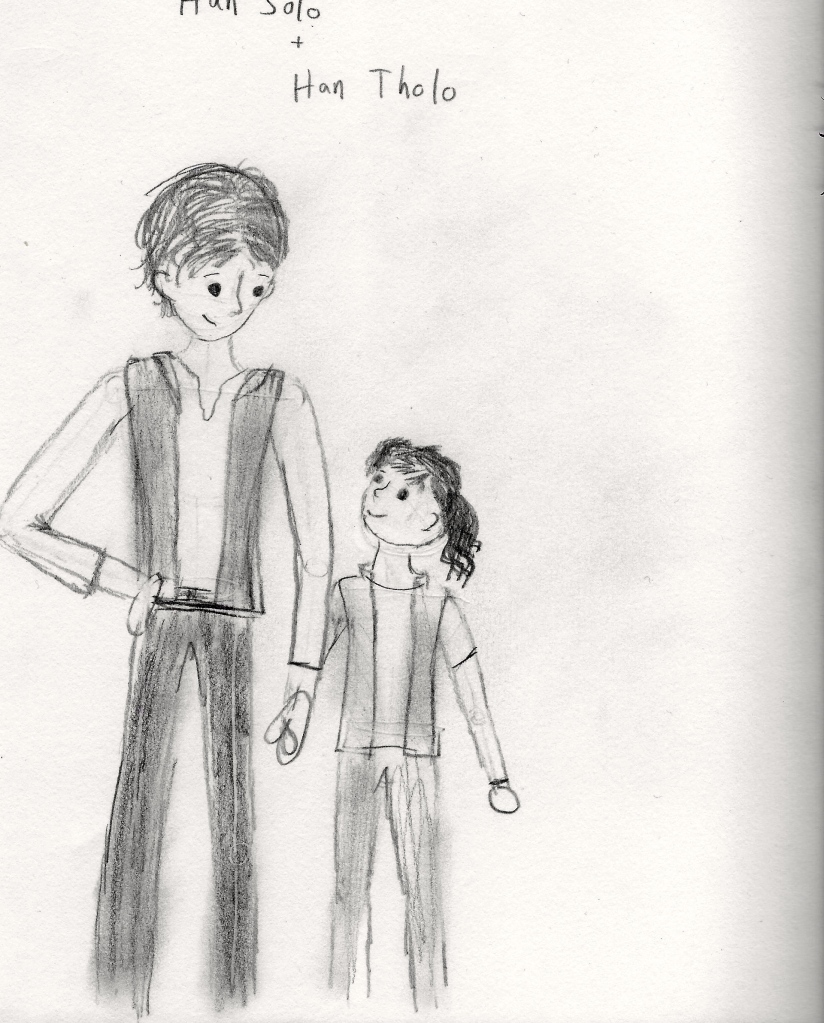 The story with that one is that I used to run around in a red vest when I was little, lisping that I was “Han Tholo.” 😛

That, and we watched Star Wars last night for the first time in a very long time. 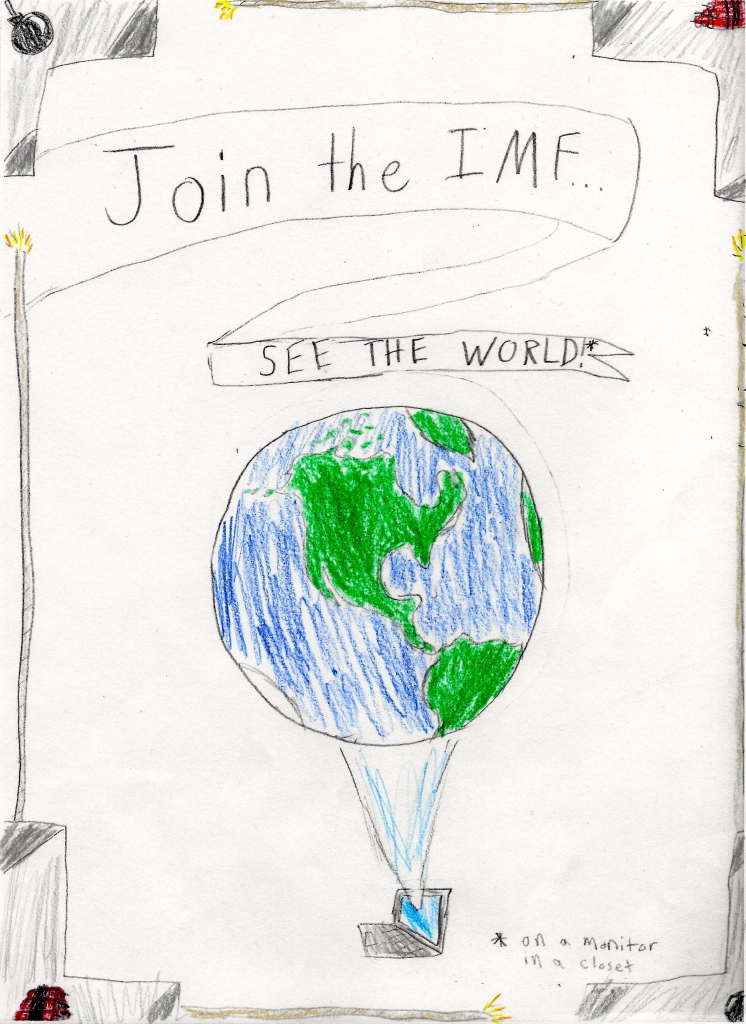 One of the Benji’s lines from Rogue Nation done up as a travel poster.

And, transitioning from that, I wrote a bit of a Mission Impossible story…

It’s just a bit of a humorous idea I had and kept popping in to write snippets of for a few days.

I had a perfect title for it. But then I found out there’s already a TV show called Kitchen Impossible. Dangit.

Agent Brandt looked up at the voice to see Benji standing next to him, coat on and bag slung over his shoulder.

Benji raised his eyebrows questioningly, “You coming or what? It’s five. We’re off.”

Sighing, Brandt shook his head “Nope. Late shift tonight for me.” He ran a hand over his hair. “I just hope I’m able to find something to eat when I get back. I’ve got practically nothing to cook with. Getting a good dinner out of it’ll be completely impossible.”

He looked back at the computer screen. The cursor blinked up at him innocently. “That, and I’m really behind on my reports.

Benji nodded in sympathy. “Well, I wish you the best of luck with that. I’m hitching a ride back with Ethan.” Giving Brandt a salute, he started towards the exit. “See you later.”

Brandt gave an absent wave as Benji walked out the door and went back to his work. He didn’t notice his friend’s sudden pause at the doorframe and thoughtful glance back at him. A grin stretched sideways across Benji’s face and he turned quickly away before Brandt could see him. The door clicked softly shut behind him.

Benji was still trying to hide his smile and failing miserably as he walked up to Ethan’s car in the parking garage. His friend was leaned up against the hood of the car with his arms folded, staring ahead in thought.

Ethan blinked and looked over to him, his slow smile coming across his face. “Hey, Benji,” he pushed himself off the car and unfolded his arms, “Ready to go?”

“Whenever you are,” Benji walked around to the trunk and slung his bag inside before coming up to the front.

Both men slid in and Ethan started the car with a glance over at Benji. He tilted his head and gave him a questioning look, “What?”

Benji turned to look at Ethan, “What?”

“What are you smirking about?”

Silence hung for a few moments before a muffled, half snicker came from Benji. Ethan turned the car out of the garage and gave Benji another glance, “Go on.”

“And I was talking to him before I left and he said he wasn’t sure if he would be able to do much for supper because he doesn’t have much to cook with,” his smile quirked up more, “He said it would be, I quote: ‘completely impossible’.” He looked over at Ethan.

“Ethan, we’re the IMF. Impossible Mission Force,” Benji grinned, “We’ve got at least a few hours before Brandt gets back. Let’s make him dinner.”

Ethan raised an eyebrow, “Neither of us knows how to cook very well.”

“All the more impossible. I mean, come on, we’ve done way harder. This is nothing. And besides, Brandt deserves a good dinner after a long day.”

Ethan looked sideways over at Benji, shrugged and smiled. “Well, it’s not like I have much else to do at the moment. Mission accepted.” He pulled off and quickly turned the car around to get on the road in the other direction.

A car behind them pulled off into an alley as they passed and the man in the car ducked, pulling his hat over his eyes. Ethan’s car sped past and he followed with his shielded gaze.

He held a radio up close to his mouth, “Target has rerouted. Will follow after a few minutes to avoid arousing suspicion. Over.”

“And we are . . . in,” Benji took out the automatic lock picker and pushed open the door. The door swung in silently and Ethan and Benji stepped in. All was quiet in the apartment and the only light came in greyly from the windows, illuminating a small couch and a coffee table holding a fishbowl.

Benji unshouldered his bag, flicked on the light switch by the door and peered into the next room, “Well, here’s the kitchen.” He walked around the corner and looked it over. Ethan followed.

Ethan shrugged, “I have more.” He ignored Benji’s wide-eyed look and walked over to the rack. He gave a tug on one of the handles, “Though I don’t take the measure of locking them in place.” Glancing down at a little keyhole by the side and frowned slightly.

He shrugged again, straightened up and opened a few cupboards “Let’s take stock of what we have to work with. You check the fridge and freezer.”

“Okay,” Benji pulled a scrap of paper and a pen out of his pocket and got to work.

It took him about five seconds to understand Brandt’s view on the contents of his pantry.

Ethan pulled four items out onto the counter and looked down at them, biting his tongue. “Almost empty,” He looked up at Benji, “What can we do with cornflakes, pecans, a cantaloupe and sprinkles?”

“Sprinkles?” Benji asked, putting a hand to his head.

“I don’t think we’ll be using those.”

“Wasn’t planning on it.”

“Well,” Benji nodded slowly, “I found a frozen fish filet, some basil and a frozen banana.”

Ethan straightened up, “Fish is something. We can do that pretty quickly.”

The sprinkles and pecans were shoved aside and cornflakes were dumped into a bowl for Benji to crush up. Ethan took on the fish after finding a saltshaker.

Both of them were quiet as they went about their jobs. It seemed like a happy silence. Content with having defeated the proclaimed “impossible”. Benji started absently whistling for a bit. Then he noticed Ethan had stopped what he was doing and squinting at nothing in particular.

“Did you bring your computer?” Ethan asked quietly.

Ethan looked out the window into the parking lot. A familiar looking car was pulling in below. “Could you grab it and tap into the security cams really quick?”

“I . . . “ Benji blinked, “Sure.” He brushed the cornflake crumbs off of his hands and went to retrieve his bag. After stationing himself at the coffee table and tapping away on the keyboard for a few minutes, the apartment building’s security camera feeds were up on his screen.

“You got it?” Ethan was still whispering. The fish he had been seasoning sat forgotten on the pan.

“Yeaaah . . .” Benji tapped on a few more things and zoomed in on something in their hall. “Um . . . Ethan? Who’s that?” He leaned in and pointed to the screen. A figure in a thick coat was rapidly approaching their door.

There was a loud smash and the door jolted partway open. Ethan shot to his feet. “Time to see what else we can find in the kitchen.”

Depending on how you guys like it, I may or may not put up the rest when I finish. How about ten likes or a comment telling me to and I will? 😛

Hope you liked the fan things! Which was your favorite?