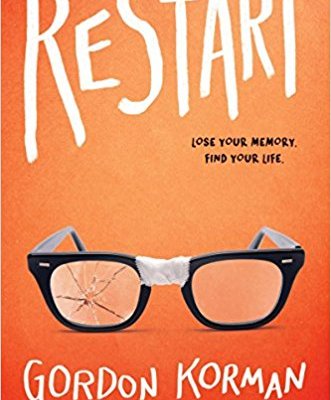 So, if you’re following my blog, you’ve probably seen the whole villain-with-amnesia story that’s taken over. And I was feeling pretty cool because, really… a villain with amnesia? Nobody’s done that. Pretty cool, right? So original.

But, so…. this new book came out recently.

And actually…. one of my very favorite authors did an extremely similar story. The story of a school bully who gets amnesia and has to redeem himself to the school.

Okay, it’s not the exact thing. Lower stakes and more of a humor-centric plotline. It’s enough to weird me out though.

The only thing I could possibly do was read and review it, right? 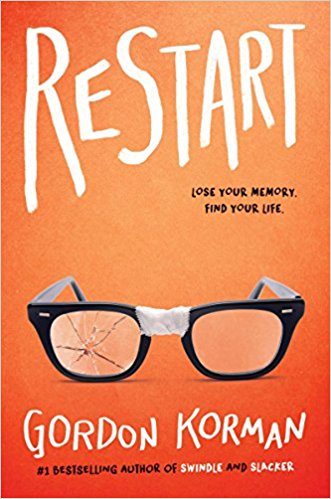 He knows he’s Chase. But who is Chase? When he gets back to school, he sees that different kids have very different reactions to his return.

Some kids treat him like a hero. Some kids are clearly afraid of him.

One girl in particular is so angry with him that she pours her frozen yogurt on his head the first chance she gets.

It seems to be a favorite thing of Gordon Korman’s to work the split POV thing as much as possible. And one of the key things on that is making sure all of your characters have distinct voices, which he does an amazing job at.

The musical genius is remarking on how the door squeaks an F#. Someone uses a lot of parenthesis and the filmmaker kid is always keeping up the narration stream on his own life events . . .

Off the top of my head, I think he had about 3 main narrators with about 4 pop-in guest narrators. It got a little confusing, but it was fun and I really liked the characters.

Okay. My reviews aren’t totally unbiased, I admit it.

But really, having the person who’s usually the bad guy get memory loss and have to deal with the villain of himself?

This is why I love Gordon Korman. I don’t think I’ve read one book of his that hasn’t made me laugh out loud at one point or another.

The concept in itself is inherently somewhat funny, so the comedy is really natural, but not over the top.

I really liked it. ❤

There were some really nice uses of all the “why you should be nice to people”, just being a good person in general . . . anti-bullying . . . not being an arrogant jerk . . . old people are people too and everyone deserves respect . . . it was really well done. Amnesia Chase really carried it well.

Okay. Basically nothing I can say here.

Except that I was grinning my little face off at the climax. It. Was. Awesome.

(-cough- on a sidenote, Chase’s last line was almost a rewording of Wolfgang’s last line, so that was interesting as well. XD)

As much as the multi-POV thing was fun, it also did get a little confusing and I had to remind myself who was talking a couple of times. That’s really not all that much of a problem though. –shrug- gotta have something to put here.

Yep, imma nitpick a little because I’m a writer and I can do that.

One, the fact that Chase got amnesia and a personality change was a little . . . convenient. It probably would have been a deeper, more meaningful character arc if he was still totally the same person, but amnesia just gave him the outside view that showed him he needed to change. (I’m NOT SELF PROMOTING GUYS I’M SERIOUS HERE.)

As it was, it was just sort of like dropping a nice character into a bully character’s life. Which was great and funny and made for a good story, I’m just saying the theme could have gone deeper with repentance and all that.

Two, the whole subplot of the football-player side of Chase and how everyone wants him to win the championship or something seemed sort of dropped to me. Not that I’m super football-invested. It was just a dropped loose end that I noticed. –shrugshrug-

A really fun, humorous read with a good concept and great characters. Definitely would recommend.