Yaaayy it’s the promised book review of the super interesting book you all should read.

What Blooms From Dust: Book Review 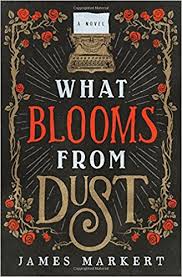 Just as Jeremiah Goodbye is set to meet his fate in the electric chair, a tornado tears down the prison walls, and he is given a second chance at life. With the flip of a coin, he decides to return to his home town of Nowhere, Oklahoma, to settle the score with his twin brother Josiah. But upon his escape, he enters a world he doesn’t recognize—one that has been overtaken by the Dust Bowl. And the gift he once relied on to guide him is as unrecognizable as the path back to Nowhere.

After one jolt in Old Sparky, Jeremiah sees things more clearly and begins to question the mysterious circumstances surrounding the murders he was accused of. On his journey home, he accidentally rescues a young boy who follows him the rest of the way, and the pair arrive at their destination where they are greeted by fearful townspeople. When the Black Sunday storm hits the very next day, the residents of Nowhere finally begin to let the past few years of hardship bury them under the weight of all that dust.

Unlikely heroes, Jeremiah and his new companion, Peter Cotton, try to protect the townspeople from themselves, but Jeremiah must face his nightmares and free himself from the guilt of flipping the coin on those men who died.

Filled with mystery and magic, What Blooms from Dust is the story of finding hope in the midst of darkness and discovering the beauty of unexpected kindness.

But seriously folks, the theme and symbolism is the star of the show in this book and it is beautifullydone.

There are a ton of symbols present and a lot of very small elements that come to play and they’re all just… really amazing. The coin flipping and the typewriter and the roses and everything.

And none of it is super obvious at the beginning but it all comes together in the middle and towards the end in a crazy cool way.

Really what grabbed me from the beginning was the vivid imagery I got in my mind while I read. Of course all books have the “movie in your head” thing to some extent and they have to. But I just had such good images in my mind of everything and all the dusty colors and surroundings even though the story rarely waxed poetic about anything. I really loved this element of the book.

I can easily say that I have never read anything like this book before. It has a really unique tone and just… it is very different in a lot of ways and it stuck in my mind – and is still stuck in my mind – as just something that really leaves you thinking.

I really did not expect this point to be making it on the list particularly when I started. xD It’s not the type of engaging you’d expect? Things don’t move very fast a lot of the time, but I still really had a hard time putting the book down because there were so many things I wanted to find out.

Plus I actually really liked the main character Jeremiah and I’m just… glad he was the main character? It was really cool seeing pretty much the whole thing from over his shoulder and figuring out his past and seeing him redeemed.

Actually really the slow climb up to the awesome ending from about two-thirds through. It was just soooo awesome and beautiful the way things turned around and little things came to light and got turned around and how everything got so much better and… I will not give away spoilers but it’s very cool.

This is during the Great Depression, folks. It’s dark at times and especially at the beginning things are just very… sad. Very hopeless. Very dusty and dry and depressing. But I promise it’s part of the theme and the group character arc. Things do get better, but that bit might be a little hard to get through.

It’s a very slow-release mystery plot going on and I got aggravated a few times by the meandering pace and just wanted something to happen.I was satisfied in the end and everything, but that was probably the hardest thing for me. xD

Yes, it has my stamp of approval, as well as my mom’s.

I’d love to discuss if you’ve read it!

Comment below. Aaand have a great rest of your week, everyone. ❤

8 thoughts on “What Blooms From Dust: Book Review”