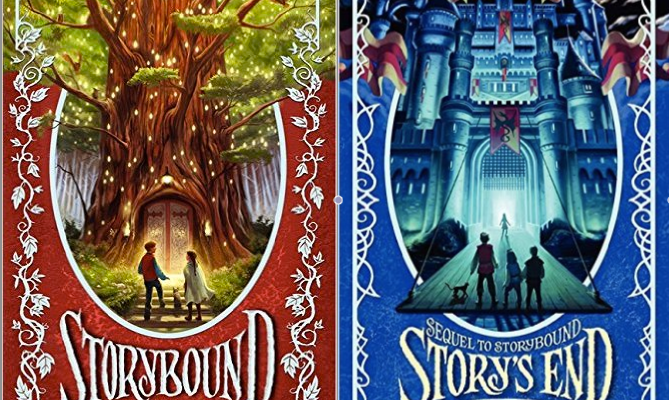 This was our latest family read-aloud and my biggest writing distraction last month.

I still loved it even though it knew I should really be writing while I was listening. 😛

Anyway, here are my thoughts on it. 🙂 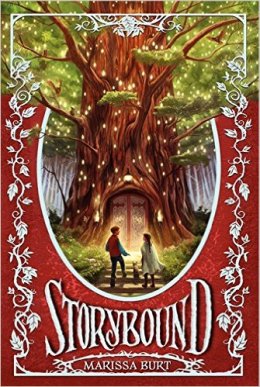 When Una Fairchild stumbles upon a mysterious book buried deep in the basement of her school library, she thinks nothing of opening the cover and diving in. But instead of paging through a regular novel, Una suddenly finds herself Written In to the land of Story–a world filled with Heroes and Villains and fairy-tale characters

But not everything in Story is as magical as it seems. Una must figure out why she has been Written In–and fast–before anyone else discovers her secret. Together with her new friend Peter and a talking cat named Sam, Una digs deep into Story’s shadowy past. She quickly realizes that she is tied to the world in ways she never could have imagined–and it might be up to her to save it. 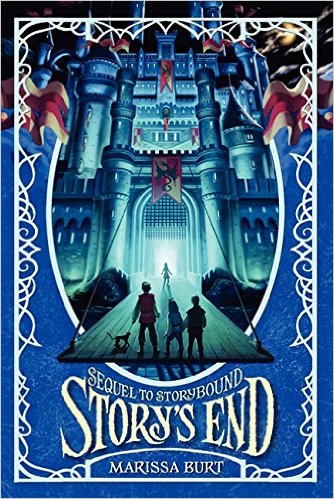 Long ago, a King ruled the land of Story… During his reign, Heroes, Villains, and characters of all kinds lived out Tales filled with daring quests and epic struggles. Then the King disappeared, and over the years nearly everyone forgot that he had ever existed. Now an evil Enemy has emerged, determined to write a new future for Story. And an ordinary girl from our world named Una Fairchild must find a way to defeat him. Una and her friends Indy and Peter set off on a quest for answers, facing warlocks, beasts, and enchantments at every turn. But Una soon discovers that the real key lies in her own mysterious ties to Story’s past — and to the long-forgotten King who may be their only hope for survival.

This premise. Oh. My Goodness. It was such a cool idea here and the author did it amazing justice. The idea that book characters actually have to be trained to be book characters until a writer gives them a story? It made me feel like a superhero or something. 🙂

I loved the whole character academy thing, too. The Heroics class, the Villainy class . . . the talking animals taking their class on Eating and bragging how it would be a breeze. . . XD

The characters were great and well crafted. Una was a terrific hero and Peter, though I think he could have been given a tad more quirks to fully flesh him out, was a good foil for Una. Sam was hilarious. Totally what a cat would say if a cat could talk and all that. 😉

Indy didn’t show up as a main character until later in the first book, but out of our three protagonists I think I liked him best. He was nice to have counteracting Una and Peter’s rather haphazard way of going at things. Always with something helpful he remembered to bring along or a good plan, though he had his moments of being sarcastically funny.

ISTP, by my MBTI guess.

Snow Watton had probably the best character arc of anyone there. She starts out as a bit of a jerk . . . okay, a lot of a jerk . . . but keep reading. I’ll be quiet now about her. Spoilers. 😉

Gosh, I can’t even say my total favorite character without spoilers. Hmm . . . well, whatever. You’ll pick him out a mile away once he shows up. 😛

There are a couple of SERIOUSLY HUGE plot twists and goosebump moments in these that had everybody fidgeting in their seats. (this was a read aloud, so we barely did anything else with our spare time for quite a while) Very well written and thought out story with an awesome premise overall. 🙂

Oh, and there was some really interesting allegorical stuff near the end that was good too.

Not as much an issue in the first book since, well, it’s a story world and there is magic in stories, so it had a pass. Plus, only the bad guys were really using it so it was portrayed as a pretty bad thing. And having a character put into the story by the *cough* author was magic as well, but it was not gone into and mostly just from the awed-character-viewpoint there.

But, stuff is a little different by the second book and good guys are now using some magic . . . we had a moment that we winced and considered stopping. We ended up finishing the story and having a conversation about magic afterwards, but magic is definitely an issue here with one of the characters.

Another, less moral issue was sort of some gross descriptions regarding some zombie things that I can’t fully explain. Mom just edited those out to spare little ears, but it wouldn’t be the biggest issue for older readers.

I would recommend it to most people, though warn about the magic.

If you’re ready to go at it with discernment, this will totally blow you away!

What do you think? Have you read Storybound or Story’s End? Think you will if you haven’t?

Tell me what you thought!