My first completed book was basically a Transformers fanfiction. And my siblings and I went through a pretty intense Transformers phase because those cartoons were awesome.

So of course this movie cropped up, and I jumped on it. 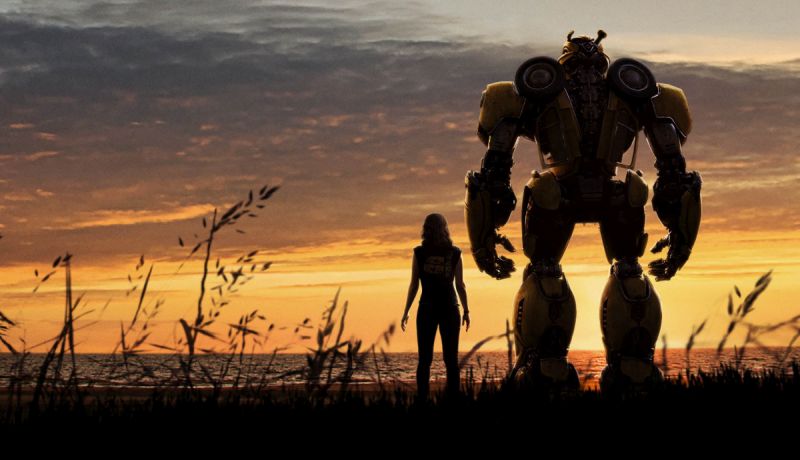 On the run in the year 1987, Bumblebee the Autobot seeks refuge in a junkyard in a small California beach town. Charlie, on the brink of turning 18 years old and trying to find her place in the world, soon discovers the battle-scarred and broken Bumblebee. When Charlie revives him, she quickly learns that this is no ordinary yellow Volkswagen.

Seriously. The very strongest point in this movie’s favor in my opinion. They adapted it right this time.

My brothers and I were just freaking out in the theater spotting all the easter eggs and things they got spot on. We were all in heaven.

The visuals and the setting and just the plotline and action of this movie felt like it actually came out of the cartoons. Like it’s something that would really happen. They weren’t shying away from just making the Deceptions super dramatically evil and overly violent, or the Autobots shiningly good and true. And they built off the cartoon’s concept very well, actually making things make more sense and apply in the real world of the ’80s.

And plus Cybertron. The Cybertron sequence was amazing and I was really happy with all the different guys I spotted there.

Can we talk about how they actually set this in the ’80s for a second?

Because that was super awesome. It felt so right. And the addition of the music and contemporary things for that time was super great and it made the feel that much better.

Okay while this front didn’t completely blow me away for everyone, they did a really decent job on this. Charlie felt believable and had realistic motivations and actions and issues she was dealing with. Memo (idk what is up with that name) was really fun and I liked him.

Charlie’s family was kind meh? I didn’t love that dynamic. But they got better in the end.

They didn’t go all over the place with this plot and blow too much stuff up, which was nice. The action scenes were well spaced, pacing was good and everything made sense with good emotional investment going on.

In short: A really solid plot.

It was kind of one of the ones where I could kind of guess what was going to happen, more or less. But I was still invested enough that it wasn’t really much of a downside? (This might be in part my watching so many other transformer cartoons. But hey.)

They had some really awesome visual gags and funny lines in here without making it the focus of the film or forcing anything. A+ here.

As I said in the plot section, it waaaas kinda predictable. While the plot was pretty solid, there were a couple of elements around that were kinda cliched. The whole “girl who is misunderstood by her horrible family and is understood by _____ she finds” (usually it’s not a giant robot so that’s cool and not the usual.) The whole “that robot is more human than you are!” And a few tonal things surrounding Charlie, which was probably the main reason I wasn’t the biggest fan of her character, compared to a few others in the movie?

But it did manage to be enjoyable even with cliches going on.

Eh, this is just me. Literally. Probably won’t effect any of you.

But there was one Transformer in particular who’s one of my favorites and they kind of showed him being very out of character for an important part so that bugged me.

And the Decepticons they sent to Earth weren’t really… very recognizable ones? I guess if they’re going to continue and want the main cast intact they’d send someone forgettable right at first and I can go with that, but I would have liked to see someone I recognized going after Bumblebee.

And sort of on that front, I wOULD HAVE REALLY LIKED TO SEE SOME OTHER AUTOBOTS DOING STUFF. Which is petty of me because of course this movie is literally called Bumblebee. And I do love Bumblebee.

But please can this movie series continue so I can see more of Optimus Prime and Ironhide and Rachet and all those guys being awesome? xD

An awesome movie and a must-see for Transformers fans because they finally got a movie right.

Have you seen Bumblebee? Think you will? What’s your opinion on the Transformers?

P.S. Yes hello -wave- I survived moving and will be back to being alive shortly here. Thank you all. -bow-