And this week on Blank Mastermind Thursday, the spotlight swings over to our very own Dallas Knight.

Well, apart from that here he is. I was sort of developing more of how his powers worked and all (running off his energy and everything) so… I did this.

If you haven’t read Blank Mastermind, major spoilers, since this is basically the climax and after told from Dallas’s point of view.

Here’s the collage and song to go with this week: 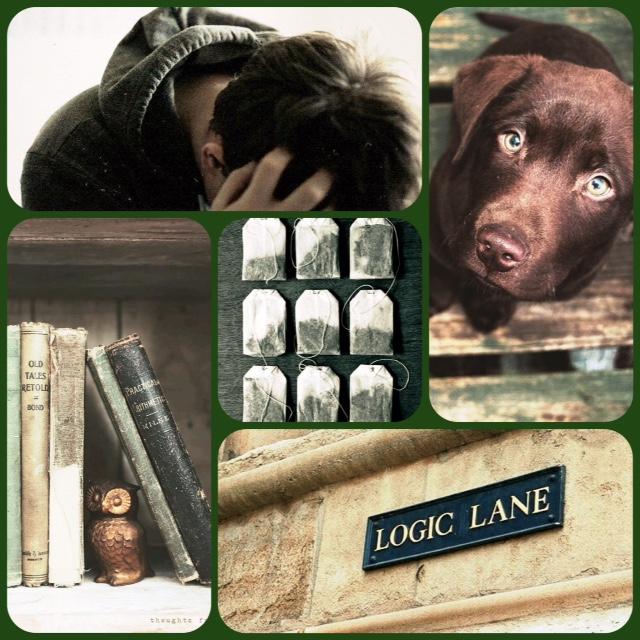 A minute and a half wasn’t a lot to work with. But since Wolfgang said he knew all the security procedures and all, I was pretty sure that it would be enough. Just get through and disarm the bomb and we’d all be out safely.

The seconds ticked on and the air pressed in tightly around us. I stood stalk still, not taking the risk of touching the casing of the bomb around us.

Wolfgang tapped the button to go on to the next slide. His hands were shaking.

Liza stood behind him, twisting her colored hair in her hands. The odd angle of the white light cast scary-looking shadows around each of us, blackening the angles of our faces.

It gave me goosebumps. I rubbed at my arms and bit my lip, willing this to go as quickly as possible.

“Is it working?” Liza asked, leaning to see. Her voice was strained.

Wolfgang nodded and checked his watch, cursing under his breath. I winced a little.

He tapped on the screen and it loaded for a few seconds before sliding to the next one. Hopefully nothing too advanced. Was this the last one?

I took a couple of cautious steps forward to see, my footsteps crunching on the rocky ground.

“Dallas . . .” Wolfgang’s voice cracked and he swallowed. He didn’t turn around to look at me. “Don’t touch anything. We still need you to get us out of here.” He looked up for a few seconds, then quickly locked his gaze back down onto the screen.

The screen popped up with another glowing button. Wolfgang smacked at it, tensing.

I jumped a little. It always scared me when he said that. And the situation we were in only made that worse.

The screen flashed red, with the words: Incorrect. Try again.

He did remember the security, right?

Wolfgang caught his breath and tried again. It flashed the same thing. He swore loudly and whacked at the side of the panel.

Liza looked about to tear her hair out. “What’s wrong with it?”

Wolfgang shook his head and tried again. And again.

Wolfgang dropped his head down against the panel, choking on his breath. “Oh God, we’re going to die in here.” His voice was more scared than I’d ever heard it.

My breathing got faster, even though the air burned my throat and held barely any oxygen. I twisted my hands harder, coming over to try and get a look at the screen Wolfgang was partly blocking with his head.

“A-are you sure it wasn’t something else?”

“I’m sure,” he shot back. “It was . . .” he trailed off for a second and lifted his head up, realization spreading across his face. “Dobby the sword.”

He snapped upright again and whacked at the button again, his hands shaking so much it was a marvel he was able to hit anything he was aiming for.

“Dobby the sword!” he yelled.

The screen loaded. Then it finally lit up green.

The bomb casing popped open and I stepped back. I could see the timer on the inside and my heart skipped a beat. Four seconds.

I had to put a forcefield up. My powers had to work. I had to save us. I flexed my hands and gritted my teeth, using my adrenaline to my advantage to gather as much energy as I possibly could in those few seconds I had.

Wolfgang shoved the metal back and held up his hands helplessly, staring over the wires like he wasn’t sure where to start. “Liza, where’s the . . .?”

Liza rushed forward, shoving him backwards. “Here!” She gripped a thick yellow wire and gritted her teeth as she yanked it out.

I put my hands up just as the timer hit zero.

Time slowed to a crawl in my mind. There was split second as the bomb went off and the forcefield materialized in front of us.

Blinding white fire blew out of the shell. Liza screamed. Pieces of shrapnel blew past, one grazing my cheek. Bigger, twisted piece was thrown against Wolfgang’s leg and I heard a cracking sound.

I concentrated all my panicked energy and everything in me as hard as I could, flexing out my fingers. Get the forcefield up. Protect them.

Blue flashed out and I gasped at the sudden release of energy. A buzzing noise sounded over the roar of the bomb as the forcefield glowed from my fingertips and bubbled around us.

The explosion . . . all the rest of the deadly debris and blinding fire . . . roared over the thin blue shield and I still felt the heat from the fire as the ground shook under us. Another piece of shrapnel slammed against the forcefield, falling through.

Everything. Throw everything into it.

I tensed all my muscles and let loose with all the power I had. More than I’d ever used before.

The forcefield buzzed loudly and grew thicker, glowing so brightly it added a blue tinge to the fire. Lighting up Wolfgang and Liza . . . crumpled and bloody on the ground.

More debris slammed against it and I felt the impact in my own body. My heart hammered in my chest and my limbs shook.

It felt like my insides were being drained out. I knew the powers pulled from the energy of the user, but I’d never felt it like this before. It was like I was being poured out. Everything inside of me was going into making that forcefield and in just a few seconds I wouldn’t have the energy to even hold my arms up. Pain started to burn in my side, feeling like someone stabbing in my ribs.

I gritted my teeth and tried to breathe past it. “Keep it up, stay put . . .” My head swam with the effort.

Power drained even faster and I could feel my legs giving out under me. The forcefield was buzzing louder. I could see its glow through my closed eyelids.

Please God give me strength, I have to last . . . I opened my eyes and gasped in a breath.

I wasn’t sure whether the roar of the bomb’s explosion had lessened or whether my hearing was just starting to go. All I could see was Wolfgang and Liza on the ground in my mind.

I ground my teeth harder and shoved my last bit of energy into the forcefield as hard as I could. It felt like something broke. Dying inside of me.

I was empty now.

My eyes closed and I fell to the ground, hardly even feeling the sharp rocks that pressed into my skin.

I was aware of a few things, but I couldn’t have put them in order if I tried. Mr. Fernsby saying something . . . the smell of smoke . . . pain screaming through my arm . . . antiseptic smell . . . blood . . . and I knew the last thing was a needle in my arm before I transitioned from my restless, drained sleep into a deeper sleep.

It felt like I slept for days, with no dreams. Just blackness and exhaustion.

Finally, a small noise made its way into my brain. I didn’t open my eyes, but just listened for a bit, trying to figure out what it was.

It tapped for a few seconds, then stopped and there was a worried, impatient sigh.

I know that sigh.

I swallowed a little, getting my throat a little less dry, and rolled my head slightly sideways. It was almost surprising that I had the energy for that, just by how drained I’d felt before.

Taking a few seconds to concentrate, I pulled my eyes open. A white, clean ceiling with a few fluorescent lights stared back down at me.

I blinked, feeling a little dizzy at the sudden light. A hospital?

A quiet gasp sounded from somewhere beyond the foot of the bed. Footsteps came closer.

I swallowed again, shifting so I was looking a bit more down instead of at the ceiling. Sure enough, a man in a plaid shirt with curly, brown hair stood there, watching me with worry and hope on his face.

The smile spread to his face and he came to my side, grabbing my hand and squeezing. “You gave me a scare, buddy.”

“Sorry,” I managed, trying to squeeze back. I noticed my other arm was stuck in a cast and laid across my chest. That was a first . . . I’d never broken any bones before. That must have been really . . .

Sudden memory pushed back into my mind and I stiffened.

I started to sit up, but Dad shook his head. “Whoa, whoa, lay still for a bit, son.”

I turned my head, blinking a little to get my focus to adjust. Mr. Fernsby. Relief loosened the tension painfully holding my chest.

He smiled, coming up to stand behind my dad. I could see the tired circles under his eyes and the worried lines on his face, but he nodded. “You three did it. The bomb just short circuited, and everyone made it.”

“E-everyone?” I could barely believe my ears. “Wolfgang and Liza? They’re okay?”

“In rough shape,” responded my dad. “But it looks like they’ll both make it.”

I let out my breath and relaxed back against the pillow. It worked. Thank you, God.

Dad smiled at me again. Mr. Fernsby shifted on his feet thoughtfully. “You . . .” he brushed a hand back to smooth his hair. “Your put up a forcefield, didn’t you?”

I nodded a little.

He shook his head, letting out his breath. “Because all three of you surviving . . . it was either that or a miracle.”

I laughed a little, even though it hurt. “You could say it was both.”

Hope you all enjoyed. ❤

Fair warning, I won’t be around much during the upcoming NaNoWriMo. (This’ll probably go down to every other week so I don’t deplete my stash I already have.) (Though hey if you’re on NaNoWriMo, go ahead and find me. I’m writefury on there as well. 🙂 )

See you all next time,

10 thoughts on “The Forcefield”