So today we’re gonna be doing something exciting. My friend Savanna is releasing her newest book soon, and I get to be part of the blog tour! 😀

Sooo without further ado, let’s get into it! 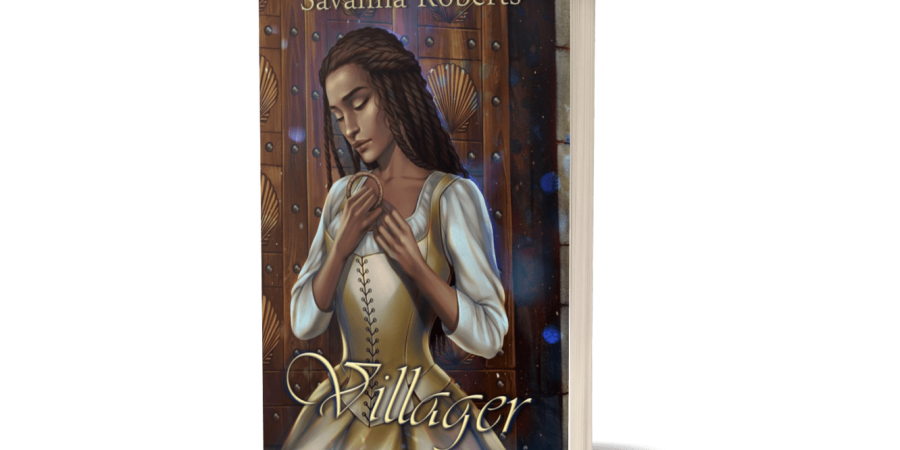 Vivianna tries to be the perfect Quelmirian villager.

She attends every festival. She is more than willing to lend a helping hand. She is an obedient, devoted daughter, and she has a wonderful family.

But when her Mam abandons her family for another man, Vivianna’s perfect life is shattered to pieces.

Desperate to help her Father provide for her younger brother, Vivianna accepts a job at the Quelmirian palace. But the palace comes with its own set of challenges, and soon she finds herself in over her head.

In Book 1 of the Quelmirian Duology, Vivianna finds herself entangled in a dangerous game where one false step can ruin everything she’s ever loved.

Definitely my favorite part about this book, seriously. I’ve never seen a fantasy world before that’s just so… colorful? It’s like African-ish, and they have mangoes and coffee fields and a lot of fruit and wear colorful, different clothes and I love it a lot. There’s a really nice balance of the storyworld not being a perfect utopia, but also not a horrible place to live. I just really appreciated the worldbuilding that went into this.

It has a lot of similar fantasy elements, but the way they’re done and twisted and shifted around, it all feels very new. The idea and the world and characters are all really unique.

Imagery is amazing. ❤ No like… blow you out of the water descriptions, but everything is described very clearly and concisely and my mental images were always very good.

I’m a big character person and I just loved the variety and personalities of the cast. ❤ Everyone seemed believable and sympathetic and very human. And they’re all very different people and didn’t always get along. It’s fun.

(I especially loved just the character concept of Prince Nex, honestly. The prince who’s supposed to be a diplomat, and who has a major anger issue, along with what I think is some anxiety. It played out in a really cool way.)

(Also I love Reeve but I have a soft spot for pirates anyway.)

This book probably needed another run through on the edits, in my opinion? I kind of wished a couple times I was doing a last-run-through round of novel critiques instead of reviewing something that was already published. Just a few tiny plot holes that could have been patched, a few repeated sentences, a few lines of dialogue that could have been phrased better.

It was smooth reading for the most part, but as a writer I had a few parts I wished I had the ability to tweak.

Not something that made me too uncomfortable, but it did kind of surprise me, honestly. xD

There’s a pretty good sprinkling of language throughout. (Not coming from the main character, but it’s around.) Nothing beyond a PG-13 level, but it’s there.

And also a few passionate kissy parts. And sex definitely being implied in a spot or two. (The bad guy and his sweetheart are pretty smoochy. 😛 )

Probably wouldn’t let anyone under 14/15 read this one.

It took me a lot longer than I would have liked to actually get to a point where some conflict kicked in. Once it did, it was great, but the beginning moved quite slowly. (Though I’m kind of divided because the beginning was where we did get most of our descriptions of the world, and the backstory plays in a lot later on.)

Also sort of a nitpick, but the beginning line/paragraph basically… have nothing to do with the rest of the story for this whole book, and only become much of a thing in the second book? So that felt a little weird having that false beginning. 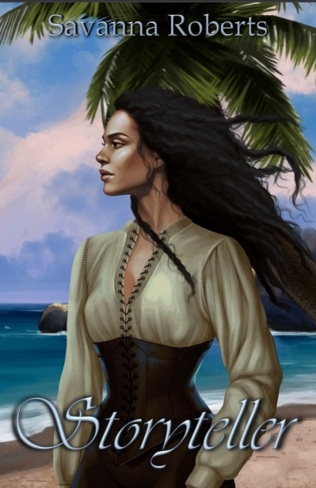 Betrayed by the person they trusted the most, Vivianna and her friends have no choice but to flee Quelmir on Reeve’s airship.

With grief heavy on their shoulders, no allies, and no plan, they seek solace on the Baylan Isles, the only place they know Kallimene won’t follow. But on the Isles, they find more than safety — they find healing, friendship, and the courage to save Quelmir.

To defeat the traitor on the throne, all of them will be tested, Vivianna most of all. Will the gods grant her the power to help save the ones she loves, or will Quelmir fall into ruin?

I could really see the improvement in writing quality from the last book here. Not that the descriptions in the last one were by any means bad, but these ones definitely had a few moments of blowing me away with being so cool. 100% awesome descriptions.

Again. I really love this story world. We got to see even more of it this time and I really appreciated it a lot. ❤ (The Baylan Isles! Man, if I thought Quelmir was colorful…)

There was a theme done in this book that most of the time comes out very political and preachy sounding, but in this one, it really didn’t. Just the idea of accepting people who were different and daring to question if “the way things are currently done” are actually the best way. And it came out really well.

THE CHARACTERS. I loved them even more this time and we got to see even more interactions. And everyone had really cool and believable progressions in their arcs, I liked it a lot. ❤

I honestly like the first book better after this one, because a lot of the stuff I wasn’t sure about or I thought would be dropped was brought back and wrapped up with a nice bow on top so now I like it. xD

The whole story ended really well and didn’t feel contrived or anything. A lot of smaller elements played in in the end and it was… yeah, it was cool.

Basically same point as on my review of Villager. Just a few more critiques and a tiny bit more spit and polish would have really made it shine.

(Plus a small extra one here that’s probably just me. Being the person who likes heist/con/spy stories that I am, I was getting just a little nitpicky with the main characters’ master plan? There were just a lot of ways that could have gone wrong. It didn’t, obviously. But it was sort of set up as a bulletproof plan when it probably could have used a little more work. xD)

Again, same point as Villager. Slightly more language in this one, though a few less sex references. Nothing super uncomfortable for me though.

There was already a pretty exciting situation going in to start with, but the book started with a dream scene that I thought was real. So maybe that’s just me, but I got slightly annoyed at first. xD

Okay another one I feel just slightly weird about. I really thought, going in, that the whole thing of Vivianna being a storyteller was going to play in more than it did. And there were little baby extra stories stuck in between chapters sometimes. And I liked some of them (the character backstory !! yes please) but the rehashed Bible stories didn’t exactly do it for me and didn’t really add much to the story overall? So yeah I just thought that plot element needed a little more tweaking than it got.

Overall: An excellent wrap-up to the story, and again, a really fun and creative fantasy story with a cool message and great characters. 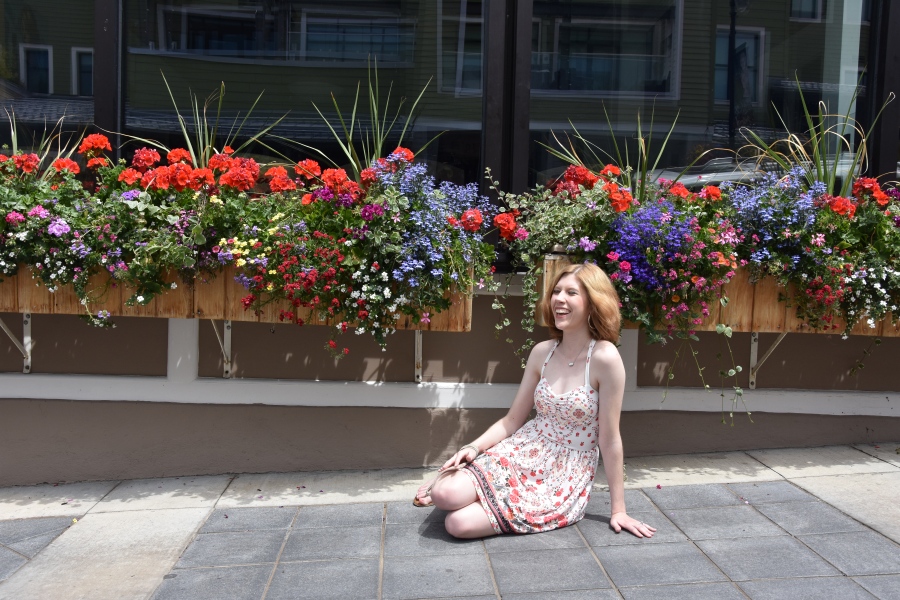 Savanna Roberts is a Young Adult author living in Utah, and she enjoys delving into the Sci-Fi, Fantasy, and Contemporary genres.  She’s written stories and poems since she could hold a pen, and she published her first book on Amazon when she was eleven.
She’s an introvert that is highly obsessed with coffee, chocolate, socks, and psychology.  When she’s not writing, her free time consists of reading, going to Starbucks, playing with her two cats, or falling down a Pinterest wormhole. You can check out her other books at www.booksbysr.com
(she’s an A+ human with an amazing blog, highly recommend checking it out. <3)
Extra links:

Villager and Storyteller Combo Review by Rosey (you are here)

October 7th: Inspiration Behind the Quelmirian Duology by Savanna

October 8th: Character Interviews with Tyde and Fiatina by Cherise

And another Storyteller Review by Meredith

So yeah, lotsa fun stuff on the horizon, I would definitely recommend checking this stuff out.

Aaaand that’s it for the day, folks! Hope you all have a great Sunday! ❤